skip to main | skip to sidebar

My research home at NYU's Polytechnic Institute was featured today on the 'front cover' of Wired.com--very exciting!

You can read the full article about our work on movement mechanics in games and how they create emotion and social connection--by following this link to the full story.
Posted by Katherine Isbister at 11:32 AM No comments: 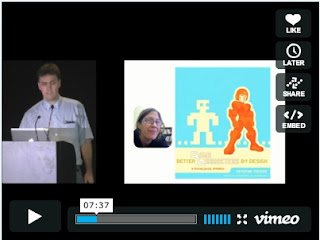 Sad that I missed Jesse Schell's excellent talk on the future of game characters at this year's Unite conference in Montreal. You can see the video here (skip to minute six to go straight to Jesse).

Definitely appreciate the shout-out that Jesse gave about my book on game character design :) Thanks to Brian Winn of MSU for letting me know!
Posted by Katherine Isbister at 11:24 AM No comments:

Blending the real and the virtual to create connection

Jesse Schell gave a talk at DICE 2010 that has attracted quite a lot of attention:


The talk strikes a nerve for many, I think, because of its frank discussion of how things like Facebook have cause ripples in the game development community. And his disturbing day-in-the-life of a person embroiled in a sensor-enabled infinite set of point-collecting games that drive her behavior, even her dreams, is not to be missed. But I mention the talk here, because I think he makes some great points that get at what generates player empathy.


In particular, two sets of examples. He discusses how Webkins was brilliant because it brings to life in digital form the imaginary animal that has always been a part of playing with stuffed animals for kids. And he points out a digital plant on the new Ford electric car dashboard, that flourishes to the extent that the driver saves gas. In both cases, the designer is forging a strong connection through the use of a digital being that responds to a person's actions in meaningful ways. And in both cases, the digital being is combined with relevance to real-world activities (playing with a favorite stuffed animal; driving responsibly). In my lab I've found that games which have player avatars tend to evoke more social exclamations and interactions among players who are playing in the same room. I believe avatars and characters are one of the fundamental innovations game designers have made in terms of generating powerful emotion in players, and Jesse highlights ways this innovation is making its way outside the realm of games and into applications that are meant to use emotion to create behavior change.


Jesse also spends time talking about social networking games like Farmville and Mafia, and points out that a powerful reason these work is that they tie themselves deeply into our existing social networks, creating a game out of games we already have going on among us--who is 'the best', who takes care of whom and why... so the game leverages existing social connections to create a far stronger emotional resonance. In our lab we've been creating a series of experimental game prototypes that make conscious use of psychological research about what generates greater connection among people, with some very interesting initial results that echo the points he makes.


It's great to see a prominent game designer and teacher taking up these fundamentally psychological approaches to understanding the transformation of what games are and how they function in our everyday lives, toward design innovation. I hope others are inspired to look more deeply into the psychological roots of powerful design choices to inform how they design and develop games.

Posted by Katherine Isbister at 2:42 AM 40 comments:

It's almost time for the Whitney Biennial here in NYC, and the main page for the show includes this intriguing gameplay interaction:

Curator Carrion-Murayari is playing FIFA soccer with artist Ari Marcopoulos, who insists on a soundtrack of painful staticky noise for their play. The victor still stands up and shouts "Oh, yes!" when he scores a goal, but the viewing experience is nowhere near as uplifting and engaging and suspense building as the usual over-the-shoulder FIFA soccer viewing...

In a way, Marcopoulous' intervention is removing a big chunk of the cinematic triggers for empathy in the gaming experience, leaving the triggers embedded in the gameplay itself (as well as, of course, the visuals). I wonder if it affects the over-the-shoulder experience far more than the play experience, based on their behavior, and I wonder if this somehow confirms the ruminations of game scholars like Jesper Juul, on the relative unimportance of the trappings for the senses that frame the core mechanics. Or perhaps the unpleasant noise creates some kind of physical tension in the players that in a weird way, enhances the build-up to the goal.

This is why I sometimes feel that artists are the ultimate empiricists, putting social scientists in the dust, in the way they poke at key questions about experience.
Posted by Katherine Isbister at 12:03 PM No comments:

The Darker Side of Social Connection

I loved Jamin Brophy-Warren's piece on the perils of co-op play. He talks about how his brother was always the aggressive, pesky, pain-in-the-neck player out for himself whenever they'd team up to play a game, and how he experienced this same behavior at E3 when trying out the new Super Mario Bros. Wii game's co-op play on the show floor.

As a researcher and designer, I tend to dwell in a utopian vision of providing opportunities for people to co-create really cool and connecting experiences, and often underestimate the little devil in each of us that is in fact cultivated in the gamer ethos of competition and boundary exploration.

The nicest people can take a turn for the worse when they play a game. I summarily refuse to play chess or Risk with my husband for this reason. But a little rough-housing and aggressive 'out-for-me' behavior can add spice to the experience. Our lab's game Wriggle! for example, seems to inspire friendly physical jostling for advantage, even among lab members.

It's an interesting aspect of game design--creating fun co-op play, while anticipating (and maybe trying to ward off the least fun variants of) aggressive and undermining behavior.
Posted by Katherine Isbister at 8:48 AM 2 comments:

The New York Times magazine has one of the most thoughtful and insightful pieces of game reporting I've seen in a long time, about Beetles: Rock Band. What was striking for me was the articulation by both the makers of the game, and by band members and their loved ones, of the deep appeal of performing/embodying the music making, and the great potential for turning music back into an active, performative, joyful part of everyday peoples' lives, as it was before the great era of recording. To quote the article directly:

"'When you need to move your body in synchrony with the music in specific ways, it connects you with the music in a deeper way than when you are just listening to it,' Rigopulos went on to say. Paul McCartney said much the same thing when I spoke with him in June. 'That’s what you want,' he told me. 'You want people to get engaged.' McCartney sees the game as 'a natural, modern extension” of what the Beatles did in the ’60s, only now people can feel as if “they possess or own the song, that they’ve been in it.' “

Or as Yoko Ono said in the piece: “It’s like dancing,” she said, or even “a very strong active meditation.”

This reminded me a column Ian Bogost wrote for Gamasutra recently that dealt with the use of gesture and movement in games, in particular his comment that 'gestures, be they transitive or intransitive, direct or indirect, can also alter an actor's own thoughts or feelings about the world or himself. These sensations can be complex, and they can evolve.'

Interestingly, the core emotional feel of the game is a departure from the typical frustration/fiero cycle that Nicole Lazzaro describes in her research--as Harmonix's Alex Rigopulos says in the article: “It is subtle, and it is sweet, and it is very embracing. This game isn’t about winning. That’s generally not done in big mainstream games.”

The reporter notes that the game isn't so much about competition, but is quite cooperative. Perhaps the musical performance paradigm is helping to drive a profound shift even from the AAA mass market side in the kinds of emotional experiences that games aim to provide to players. As Jenova Chen said in his Develop 2009 talk, "Sometimes hard fun is your enemy," said Chen, "but it’s too easy to try and make a hard, fun game, as it’s almost all we know."
Posted by Katherine Isbister at 9:57 AM No comments: 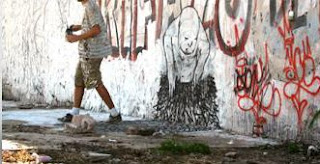 I visited the Bremen Weserburg Museum yesterday, where I saw an exhibition called Urban Art. By far my favorite piece there was a video which was of graffiti that had been done on walls around Buenos Aires and Baden by an artist called 'Blu'. The figures transform, engulf one another, shatter, and otherwise crawl, scamper and squat against the walls of an urban landscape of decay and other graffiti.

You can see the video here. The artist's work is lovely but also deeply disturbing. My daughter watched it and got very frightened (she is 2 1/2). This surprised me (I wouldn't knowingly frighten her) and in thinking it over, it seems to me that Blu provides a very bleak and disturbing vision of human nature. His figures are lonely and do not have much emotion--they are blank, hungry, scrabbling things. I find them beautiful but I cannot connect to them except as the mirror of a form of despair and isolation and blankness.

What I especially love about them is the way they move through the landscape, magically, occasionally kicking over something in their way that is 'real'. It feels as though they would not register my presence at all, but would simply dance over me, leaving a white trail of paint, if I stood in the way.
Posted by Katherine Isbister at 4:14 AM No comments:

Katherine Isbister
I received my Ph.D. from Stanford University, with a focus on applying human social behavior to the design of digital characters. Since then, I’ve worked in both industry and research venues to create and evaluate interfaces that enhance the player (or user) experience using social and emotional qualities. These days, I am an Associate Professor at NYU-Poly in New York City, and also have an ongoing affiliation with the ITU Copenhagen’s Center for Computer Games Research. My current research interests include emotion and gesture in games, supple interactions, design of game characters, and game usability.